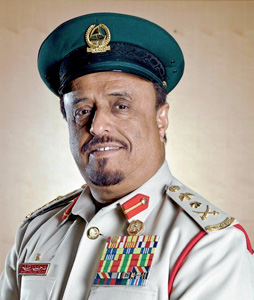 Deputy Chairman of Dubai Police and General Security in Dubai

Lieutenant General Dhahi Khalfan Tamim has been appointed the Deputy Chief of Police and Public Security in Dubai since October 2013 and is a member of the Executive Council of Dubai.

Prior to this role, Khalfan served as the General Commander of Dubai Police since 1980, fully transforming the Dubai police force by ensuring that Dubai Police adopt the highest international standards of quality. Dubai Police is considered one of the most advanced institutions in the Emirate.

Under his command, Dubai Police has achieved several milestones. Tamim established the Dubai Police operations room, which is ranked as one of the best of its kind in the world.

In 2013, Dubai Police receives 14 awards from the Dubai Government Excellence Program out of the 20 total awards given for the year.

Khalfan Tamim was also a Board Member in Emaar Properties; and a Board Member in the Emirate’s Municipal Council. Khalfan Tamim was also previously the Chairman of the UAE Athletics Federation. Tamim has written a number of books in his field including Black Points System & its Effect on the Efficiency of Traffic Control; Police & Human Rights; Police Role in the Treatment and Rehabilitation of Repentant Drug Addicts;

Tamim graduated from the Royal Police Academy in Jordan in 1970. He attended numerous training sessions in the fields of police work and specialized in criminal investigation.