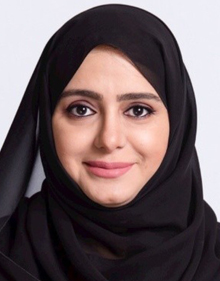 Engineer Anwaar Al Shimmari is working for the Federal Geographic Information Center. She is an Innovation Licenses Practitioner. She was a Chief Innovation Officer and Director of Design at the UAE’s Ministry of Infrastructure Development (MOID) where she also leads the artificial intelligence (AI) team and the authority’s Scientific Research committee. Eng. Al Shimmari has 19 years of multi-discipline experience in architecture, urban planning, engineering, and infrastructure sectors. She holds a BSc in architectural engineering, two master’s degrees in urban planning and transport planning, and is a PhD candidate at Urban Planning Public Policies. Al Shimmari also holds a diploma in government innovation from University of Cambridge, and another in executive leadership from Oxford University. A board member at Sheikh Zayed Housing Program and vice president of ASTM Chapter in UAE, Al Shimmari is a member of numerous entities, such as IAARC, IQLI, GINI Council, Innovation 360, and AIPMM. She had several awards internationally and locally.